This page contains the full solution for the Slightly Cryptic Crossword. Do not read on unless you want to have all the answers given away. 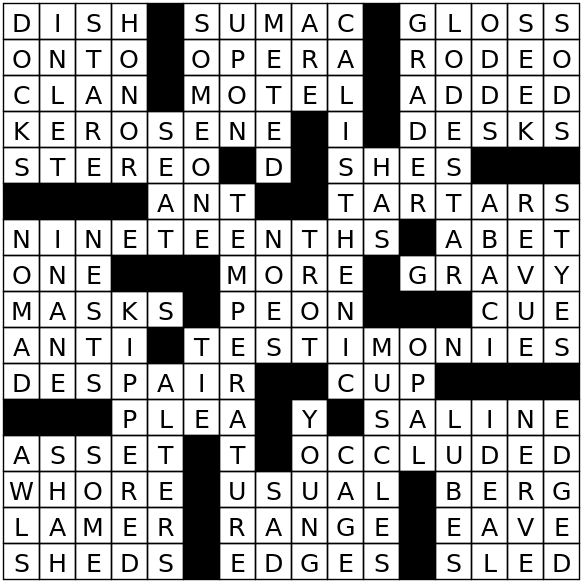 5 A poison (5)
The clue refers to the plant known as poison SUMAC. Other poisons include poison ivy and poison oak.

15 Mount when you hear me count (4)
To mount something is to move ONTO it. Hear indicates a homophone; the action is to be taken ON TWO.

16 Cutting short a surgery changes the theater (5)
Cutting short (truncating) a surgery (OPERATION) yields OPERA, which takes place not in a surgical theater but in a different kind of theater.

17 Western entertainment (5)
Western here is used in the sense of the movie genre called westerns. A stereotypical entertainment in the Wild West is a RODEO.

21 Lamplighter (8)
Certain types of lamp are lit (illuminated) by the burning of KEROSENE.

24 Double-sided (6)
An audio track that is in STEREO is one that has separate tracks for both sides (left and right).

25 Ladies’ common titles (4)
One of the commonest ways to refer to a lady is as “she”. The clue is plural, so the answer is SHES.

29 Mongols make sauces from plaque (7)
The Mongols are descended from the TARTARS; there is a sauce called “tartar sauce”; and tartar on teeth (dental calculus) is formed (made) from plaque.

33 Confuse a sentient hen for fractions (11)
Confuse indicates an anagram. SENTIENT HEN can be rearranged into NINETEENTHS, which are fractions.

38 Incite a wager (4)
Incite is one of the primary meanings of ABET; a wager could also be called A BET.

40 With 39-Across, makes ready for time (4)
39-Across is ONE, which pairs with MORE to precede (make ready for) the word TIME in the song title ONE MORE TIME.

41 Something extra comes in a boat (5)
GRAVY can mean an extra bonus, or a sauce often served in a gravy boat.

42 Faces covers (5)
Could be read as faces’ covers, face covers, etc. Covers for faces are MASKS.

44 A worker that scrambles to refuse (4)
Scrambles indicates an anagram. PEON is an anagram of the refusal NOPE.

45 The white ball is a signal (3)
CUE can mean either the white ball in billiards, or a signal such as the one that tells an actor when to come onstage.

47 They say grumpy payments bear witness? (11)
They say indicates a homophone (in this case, a slightly strained one verging on a pun, hinted by the question mark). Grumpy payments are TESTY MONEYS, which sound like the TESTIMONIES that bear witness.

50 I hear this fruit might make you lose hope? (7)
I hear and the question mark indicate another strained homophone. This fruit is THIS PEAR; one who has lost hope is in DESPAIR.

52 Hold the vessel (3)
Hold and vessel both define CUP.

63 Clued doc scrambles to be covered up (8)
Scramble indicates an anagram. CLUED DOC rearranges to OCCLUDED, which is defined by covered up.

66 Hawaiian mixers become common (5)
Mixers is doing double duty here. It indicates an anagram; in addition, a mixer is a party. Hawaiian [parties] are LUAUS, which anagram to USUAL (common).

68 Sinker without ice is a mountain (4)
An ICEBERG is a sinker of ships; subtracting (without) the word ICE yields BERG, meaning mountain.

70 At home on the stovetop (5)
A stovetop is a RANGE, which completes the song title HOME ON THE RANGE.

2 The water’s not where you plug in (5)
You plug in to an OUTLET. Not inverts this to an INLET, which is a geographic feature made of water.

3 Gaze at the way up, they say (5)
To gaze at something is to STARE at it. They say indicates a homophone; the way up is a STAIR.

4 Not an offer (5)
Not inverts OFFER into HONOR. (OFF->ON, phonetically)

7 Measured? Not again, but measured. (5)
The first measured is METERED. Not again subtracts RE, leaving METED, defined by the second measured.

8 Our sounds exist? (3)
Sounds indicates a homophone. OUR is (depending on dialect) pronounced like ARE, which is defined by exist.

9 Workout helps Calvin get in character then? (11)
Once Calvin gets in character, CAL IS THEN I.C. (“IC” is a widespread abbreviation for “in-character” in roleplaying contexts.) The workout is CALISTHENIC.

10 Marker (6)
Marker is here used in the sense of one who marks a test: a GRADER.

11 Mine’s celebrity makes Polaris (8)
A mine might follow a LODE; a celebrity is a STAR. A LODESTAR is a guiding star, especially the pole star Polaris.

12 Uneven chance with ends (4)
The uneven integers are the ODDS; the chance or probability of something happening are the ODDS of it happening; ODDS is paired with ends in the phrase ODDS AND ENDS.

14 Soap bubbles have a change of heart, become turfs (4)
Soap bubbles are SUDS. The heart is the vowel near the middle, which changes to form SODS. Sod is a type of turf; both are pluralized.

26 Enjoys (3)
When someone HAS a privilege, it is considered grammatically correct to say that the person enjoys the privilege, regardless of how they actually feel about it.

28 The hottest stars get high (11)
Hottest stars should be read literally, referring to astronomical bodies. A very hot object such as a star attains a high TEMPERATURE.

30 Counters (5)
ABACI are used to count, which makes them count-ers.

33 Not angry, just wandering (5)
Not angry is NO MAD. A wandering person might be a NOMAD.

34 Stupid is one less than crazy (5)
INANE is one letter less than INSANE.

35 Traditional birdhouses (5)
The longest-standing tradition for birds’ homes is to be NESTS.

48 They say shellfish are the source of strength (7)
They say indicates a homophone. MUSSELS are a type of shellfish; MUSCLES are the immediate source of physical strength.

49 This cat’s owner is a rarity (4)
In My Little Pony: Friendship is Magic, the character Rarity owns a cat named Opalescence, which name she often shortens to OPAL.

54 No guy confused is not old (5)
Confused indicates an anagram. NO GUY rearranges to YOUNG, defined by not old.

56 Slippers (5)
LUBES (lubricants) cause things to slip; therefore they are slip-ers.

58 This messenger has resolve (5)
A NERVE acts as a messenger for transmitting signals within the body. Resolve can also define NERVE.

59 Trimmed (5)
If I have trimmed the lawn where it touches the sidewalk, then I have EDGED the lawn.

61 A hash with the start of a hat rules (4)
SHA is a hash algorithm. The start of a HAT is the letter H. SHA with H makes SHAH, who rules a country.

64 If you take the top off this enclosure, you’ll discover an era (4)
As this is a Down clue, the top is the first letter. Taking the first letter off CAGE reveals an AGE.

67 In this adage, you might feel down (3)
In indicates a hidden word clue. When you feel down, you might be SAD; this is hidden in THIS ADAGE.